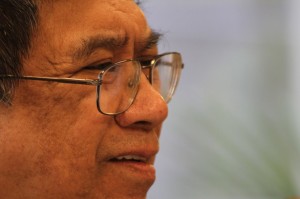 All behaviors have meaning and aggressive behaviors have been called ‘responsive’ because research suggests that aggression is not unpredictable or meaningless, [1] but rather often a response to something frustrating or confusing. There is an increasing awareness that responsive behaviors are a cause for significant concern – some providers name this as the number one difficulty. Not only for the safety of residents and staff but also a potential liability exposure for the organization.

One of the challenges in finding a solution, however, is the tendency to describe aggression as a single discrete phenomenon when it is a complex issue involving with a wide range of specific factors.[2] Pillemer (2011), used the term ‘interpersonal aggression’ to describe the diversity of verbal and physical behaviors including aggression directed from residents to staff (a common source of stress for staff),[3] staff to residents, as well as resident to resident. Even within the resident to resident category, there are subtle differences. Relational aggression for example, is a manipulative form of bullying among residents.[4] One out of every five residents experience relational aggression by a fellow resident, which can result in depression, anxiety and social loneliness.[5] Given the extent of the distress this causes for residents, staff and caregivers as well as the related socio-economic costs, intervention research into improving interpersonal relations needs to be a high priority.

Rethinking ‘Aggression’: The Power of Compassion

Responsive behaviors such as aggression are influenced by numerous factors but recent research has identified two key concerns: lack of control and loneliness.[6-8] Some research suggests that we need to rethink aggression from a perspective of powerlessness. Behuniak (2010), for example, argues that those with dementia are vulnerable and entitled to what she calls ‘compassionate uses of power’. Power is a concept often referred to as a force used over people. The medicalized model approach (one in which residents in senior living are viewed patients with a medical condition), treats aging as a condition that requires medication – meeting force with force.[9] In this ‘power over’ model, the care of those living with Alzheimer’s disease results in a loss of self over time. According to Behuniak (2011), as individuals lose their cognitive and physical abilities, their sense of self is eroded leaving them powerless. Their physiological needs are being taken care of but their ability to engage in a meaningful or purposeful way in their lives diminishes. In addition, May (1973) suggests that it is the often subtle daily practices of control and social exclusion by those caring for them that leads to aggression. That aggressive responses are a fundamental struggle for the power to be. May’s (1973) theory of power also describes how the concept can be viewed in other ways. For example, in addition to the forceful ‘power over or against’, there is also a ‘power for’ (the welfare of those we have responsibility for), and a ‘power with’ (a non-violent approach that invites awareness and cooperation—one power helping another).

A Ray of Hope: Towards a New Culture of Positive Mutual Support 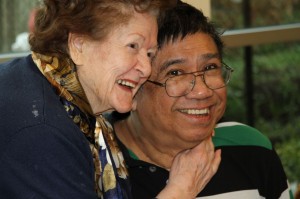 Building a culture of positive mutual support—one power helping another— is a key tenet to this complex issue in our senior living communities. A culture of mutual support is based on the deliberate cultivation of compassion, combined with action. By this I mean the provision of regular, ongoing structured programs that encourage seniors to reach out and help one another. Positive relationships are nurtured and the attention of residents and staff, and ideally the entire organization, becomes focused on the positive engagement of all, especially the lonely and isolated. Loneliness and depression are linked, and both are linked to aggressive responses.[11] Programs that focus on mutual support foster meaningful connections and target psychosocial issues including loneliness, isolation and powerlessness,[12-16] and associated aggression. Even those with advanced cognitive impairment can become engaged though emotional stimulation in mutual support processes, with the right supports in place.[17] Further investigation and research into creative applications of this approach is warranted.

Loneliness and social isolation are overlooked but integral components related to the issue of aggressive responses,[6] and play a far bigger role than we think. Unmet belonging needs and fear are linked with numerous negative consequences, including interpersonal violence.[7, 18] The World Alzheimer Report (2013), recently identified being able to have control and a voice, maintain and develop relationships, and contribute to society, as key standards for care. Research suggests that even simple positive social interactions can be enough to reduce aggression.[8] People receive significant benefits from reaching out and tending to the needs of others. Through this very action, they regain a sense of self and purpose, view themselves and their problems from a new perspective, and find they are not alone.