HomeIn the NewsWhat is Happiness to You?
/ 2
/ Kristine Theurer

“Happy”, the uber cheerful song recorded by Pharrell Williams, was the best-selling song of 2014 in the United States. 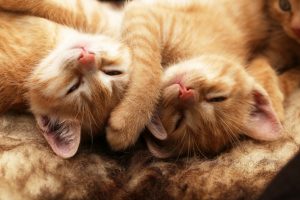 “Clap along if you know what happiness is to you…” I sang along every time I heard it—I still do. I love that song. But deep inside, even as I clapped along I knew I wasn’t all that sure I what happiness was to me.

Well, kind of, sort of, some of the time (cute kittens), but in the end, not really. The only thing I was sure of is that whenever I finally got what I thought I really wanted, the happiness didn’t last. I knew I was very fortunate—I was alive, I was loved, and I had an amazing life.  I knew I should be happy, but somehow it seemed to be one elusive entity.

As a western society we focus on the pursuit of acquisitions—buying material possessions, increasing our status, going on trips—what we want seems to be endless. I have done this and found it results in a continuous ongoing cycle of consumption, but not happiness. Research indicates in fact, that excessive consumption actually contributes to a reduction in happiness and an increase in social isolation and loneliness (Esposito and Perez, 2014).

Loneliness is everywhere—over one third of older adults experience it (United States Senate on Aging, 2017). This is especially true in residential care homes such as long-term care (where it affects one out of two), and even in assisted living and retirement.

In our attempts to provide social and emotional care for those in these settings, we are missing a key ingredient—meaningful close relationships.

From an evolutionary perspective, having strong social relationships is a matter of survival, but building and keeping these relationships among humans is a complex process that often fails.

The innate need for social connection serves as a motivator, for to be separated from others is a threat to our survival (Cacioppo & Cacioppo, 2014). This need can also be accompanied by anxiety or fear and create a self-perpetuating loop (Hawkley & Capitanio, 2015).

In a model of loneliness proposed by Hawkley and Cacioppo (2010), the authors argue that for lonely people, this loop consists of a combination of seeing people as threatening, expecting negative social interactions and storing increasingly negative information.

The result is a self-fulfilling prophecy wherein this stored negative information brings about behaviors in the lonely person and in others that confirms the expectations. This perpetuates a cycle of loneliness that reinforces a belief of lonely individuals that they have little control over how they are perceived by others and that they have little social value.

For older adults who face multiple physical and mental health challenges, these complex processes are especially difficult to navigate. Loneliness is not related to the number of acquaintances or contacts we have—it is a longing for closeness.

Despite the growing evidence that superficial gatherings are not successful at reducing loneliness (Gierveld et.al., 2017), we continue the long-standing tradition of providing light social events.

We do this even though few of these interventions actually reduce loneliness (de Jong Gierveld, Van Tilbur, & Dykstra, 2017). Now we know that loneliness not only makes us emotionally miserable, it also makes us physically sick (Cacioppo and Cacioppo, 2014). Surely, it is time for us to change this tradition.

Residents are telling us what they want. A 2017 study asked people moving in to residential retirement communities what mattered most to them, and they told us (Yeung et.al., 2017). It was a dignified environment that focused on relationship building and reducing loneliness and isolation.

We should pay attention to what residents want and work in partnership with them to make this happen. 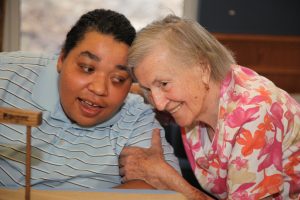 In the acting of giving to my peers, I have found some contentment and peace in myself and know better now what lasting happiness means for me. And I know I’m not the only one.

The solution to happiness—right in front of us all the time.