Some say music brings people together. A few retirement communities in Ottawa are counting on it, and hope it will help fight isolation and loneliness, too. 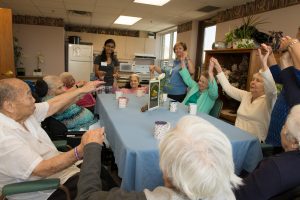 Researchers at Carleton University brought a musical group dubbed the Java Music Club to three retirement communities in the city on a weekly basis, to see if a structured peer-support music program would help seniors feel more connected.

“Lots of social activities in residential care homes, they might be a lot of fun,…” Dr. Renate Ysseldyk, a Carleton professor who heads the study, told CBC Radio’s Ottawa Morning.

Connie Wu, a Carleton masters student, watched one woman come into the home after an illness. She didn’t know anyone and was becoming isolated, but then joined the Java group.

“You can notice the real change in her,” Wu said. “She went from not saying anything, not singing along, to now she’s singing along. She knows everyone in the group and she’s getting out. She’s going to other activities.”

Being open and sharing thoughts and experiences, such as the conversation about mothers, is what really matters in the group, Dr. Ysseldyk added.

“Music is a part of it, but it’s not really what it’s about,” she said. “It’s about the social cure. It’s about using that as a real medicine here.”