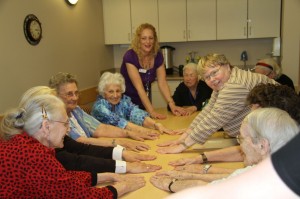 Those living in long term care communities such as care homes, assisted living and retirement homes face numerous barriers to feeling a sense of inclusion and belonging. It is hard to imagine what it is like living in a place with some many others.

One resident summed it up when she said: “My room is at the end of the world.”

Increasing Social Inclusion and a Sense of Belonging: Two Approaches
A strong sense of belonging not only increases the likelihood of being happy (Theurer & Wister, 2010), but it is also positively associated with better self-reported physical and mental health (Sladowski, Hientz, & MacKenzie, 2013).

It makes sense that social inclusion and a strong sense of belonging can contribute to both individual and community well-being. In a recent study, social inclusion through volunteering is reported as a “promising strategy” for a number of reasons (Sladowski et al., 2013). For residents it can help them focus on what they have to offer, rather than being viewed solely as recipients of care.

The study underscores two approaches that can help us engage residents as volunteers: volunteering as a group and using mutual support groups as a foundation to volunteering.

Volunteering as a Group
The following two gaps in volunteering opportunities were identified in a pan-Canadian study in 2010 (Heintz et al., 2010):
1. Many people are looking for group activities (volunteering as a group), but few organizations have the capacity to offer them.
2. Many people come with professional skills, but many professionals are looking for volunteer tasks that involve something different from their work life.

The authors noted that all age groups seemed to like volunteering as a group – the chance to be involved in a social activity that also has meaning and purpose. In this way the act of volunteering can provide a protective role against loneliness as well as providing a sense of belonging. In addition, providing training for resident volunteers to develop skill sets that they do not already have, can allow them to grow.

Support Groups as a Foundation for Volunteering – Enhancing Mental Well-Being
There is an emerging body of research that documents the effectiveness of mutual support groups in alleviating loneliness and depression in the community (Bright, Baker, & Neimeyer, 1999; Logsdon et al., 2010; Roberts & Silverio, 2009; Snyder, Jenkins, & Joosten, 2007).

In a recent evaluation, one mutual support group participant commented: “It takes the loneliness away.” and another said “Its like brothers and sisters you don’t have.”

Creating similar mutual support group structures like this within long-term care, can allow residents to gain self-esteem and to increase their engagement in helping others in their community. Not only supporting one another in the groups, but also reaching out to those that are lonely or isolated outside of the group times.

The more that we create meaningful opportunities for residents to engage with one another and volunteer, the more we will help them create the quality of life they deserve.