Loneliness and the feeling of being unwanted is the most terrible poverty. Mother Teresa.

The Senate Aging Committee recently held a two-part series shining a light on the growing phenomenon of loneliness and social isolation affecting older Americans. “Isolation and loneliness can have serious, even deadly, consequences for the health and well-being of our nation’s seniors.” says U.S. Senators Susan Collins.

The Toronto Globe and Mail describes loneliness as a public-health crisis in waiting. Loneliness has an associated stigma, a ‘whiff of failure’ that is difficult to speak about. And so, it remains an open secret— heartbreakingly apparent but often ignored or accepted as the cost of growing old.

As a researcher, I’ve been investigating loneliness and social isolation for over 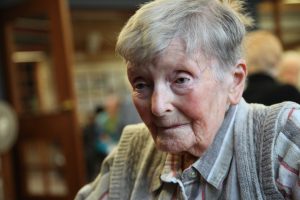 15 years and the stories I continue to hear from residents fill me with sadness.

One such resident—I’ll call her Lillian—is a retired school teacher who lives in a large care home surrounded by 240 residents and over 400 staff. When I walked into her community, it looked like a bustling happening place. One of the first things I saw was a busy social calendar tacked on the wall near the entrance.

Yet when I visited Lillian in her room and asked her how she was doing, she talked about feeling empty and profoundly lonely. She had no interest in the events offered in her home. She said to me:  I’m lost here and depressed. No one knows because I suffer in silence. My room is at the end of the world.

Studies indicate one out of two residents in residential care homes suffer form loneliness. A 2013 study, for example, revealed that over half (55%) of the 296 residents living in a home (55%) experienced loneliness.

And loneliness is so much more than a distressing feeling—it’s impact on health is severe. Research is demonstrating that loneliness is linked with increased depression, dementia, heart disease, even increased falls and emergency visits. Residents diagnosed with or showing signs of depression are more likely to exhibit severe aggressive behavior and conflict with staff.

The work of care staff is undermined by this challenging environment resulting in high staff turnover in an industry already desperately short of qualified help – and things will get worse. There is no way to balance an equation that has increasing demands on one side, and dwindling resources on the other. We are in a crisis and something radical has to shift.

Social identity theory suggests that as human beings evolved they developed a sense of responsibility and caring for the well-being of others. In a healthy community we help our families, our neighbors, and those less fortunate. We build bridges, cities and entire countries together. The very fabric of society is dependent on helping one another. Without this type of engagement our lives lack meaning and we become socially isolated and lonely.

I’ve come to believe there is an urgent need for a social revolution in residential care—an overturning of the entrenched medical model and cruise ship approach to individual social and emotional well-being. A move from what we can do to and for residents, to what they can do for one another. Peer support—residents helping each other.

Over the past five years I have developed and piloted a peer support approach called the Java Mentorship Program. In this program, community volunteers and residents meet weekly as a team and call themselves mentors.

Each week at the team meetings they do a check-in, receive education on how to be a mentor, and talk about who is struggling with loneliness, who just moved in or is just back from the hospital, who used to come to things but has stopped?

Participants then pair up to visit socially isolated residents. They develop bonds with and engage residents who typically are difficult to engage and who seldom attend programs.

As a PhD candidate at the University of British Columbia, Canada, I partnered with the Schlegel-UW Institute for Aging and Schlegel Villages in Ontario in 2016 to conduct a 6-month trial of this mentoring program involving over 200 participants. 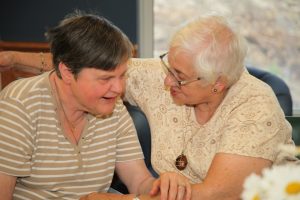 Mentors described the personal benefits experienced through the team meetings and the mentoring and expressed an increasing sense of empathy and connection with those they visited.

After 6 months, a statistically significant drop in visitee loneliness (p = 0.02) and depression (p=  0.02) was measured and a 60% increase in the number of other monthly programs attended was observed (p = .01). Findings from this research are being presented this week at the 21st IAGG World Congress of Gerontology and Geriatrics in San Francisco.

I’d like to return to Lillian, whose story I shared earlier. After the mentorship program was implemented in her community, Lillian received visits from 2 mentors and over a few months things began to change. Really change.

Lillian loved the visits. She ended up asking if she could become a mentor too, joined the mentorship team and began visiting those struggling with loneliness and depression like herself. When I returned several months later and asked how mentoring was going she said: “I’m 95—it gives me a new lease on life. It makes my life worthwhile!”